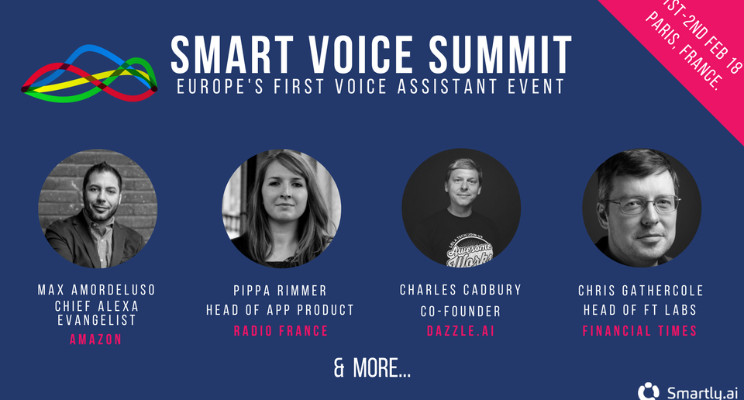 I specifically remember a talk given by Rory Sutherland of Ogilvy in 2007/8 in the IMAX in London. I was one of 250 people in the room there to learn about the first report on app store metrics and some semblance of order and validation coming to the “mobile” landscape. For several years, there had been a tight network of “mobile experts” all believing that this was an important new platform. They were all trying to figure out exactly how it could deliver the most value to the masses and how to capture that value for commercial gain.  Rory said “Go forth and have a drink with your peers today; you will need to continue to collaborate in the short term, in 5 years or so you will all be in competition”. The Smart Voice Summit in Paris this week felt like those early days of mobile, the beginning of the maturation of an important platform.

The excitement at the event (organised by Smartly AI) was palpable and there was no doubt that this new platform, voice, is being quickly adopted. Some particularly impressive insight shared by Bret Kinsella of voicebot.ai quantified just how quickly smart speakers are being sold (nearly 4m in UK in 2017). He also revealed that 51% of adults have now used a smart speaker. Lionel Mora from Google was quick to point out that there’s already an install base of 400million devices carrying their assistant as it’s baked into many android devices.

Cross device/multi device was a theme championed by several speakers and it was great to get validation on the multi modal approach we are taking at Dazzle, a multi modal conversational platform for rail companies. Karen Kaushansky gave an excellent talk looking deep into the future to give great context to our thinking. She put it really well saying “The voice experience is not always the first interaction with your customer, voice could play its part mid conversation”.

There was a heavy focus on UX and user centric design that was refreshing for this kind of tech development and even renegade advice saying that the best way to get approval for any project from upper echelons of an organisation is to create a demo. This was hammered home by an excellent quote from (OMG, I’ve forgotten who…sorry!) saying that “If a picture is worth a thousand words then a prototype is worth a hundred meetings”. Building for voice is a not a job for classic teams of developers as copywriting skills are critical, a space where the BBC believe they have an advantage.

I particularly enjoyed the Jedi UX tricks from Ben Sauer of Clearleft, the considered, playful approach from Chris Gathercole of the FT and to hear how far SNCF have gone in this space from Benoit Bouffart, who I sat with on the transport panel. It was great to hear these guys sharing their first-hand experiences of what’s worked, what’s failed and the questions that remain unanswered.

I’ve returned to London buoyed with excitement for the rise of conversation as a platform, with validation that this is happening and coming to the masses at pace. We’re still early enough though for plenty of collaboration and I’m happy to have met some great people who I’m hoping to spend some time with over the coming years to discuss the best way to make this platform deliver its potential to the people.