Disclaimer: Somewhere along the line I must have been drinking the French cool-ade.

I have in the past been guilty of thinking France was a technological luddite, crippled by bureaucracy and I am so very wrong today, Thursday 24th May, at Vivatech in Paris. Mark Zukerberg, in a fantastic interview with Maurice Levy (Chairman of Supervisory Board at Publicis Groupe) stated that out of the 4 AI hubs Facebook has globally, Paris is performing the best, they are putting another $10m into it and are doubling their scholarships. AI has no cultural allegiance but winner takes all, this is a wise move.

I can’t remember a more inspiring conference, it reminds me of the great “World Fairs” as the industrial revolution matured and the possibilities of the internal combustion engine and telecommunication really started to take hold and give birth to things like flight, cars and telephones. Today we had robots greeting us, flying cars and thousands of compelling concepts that will harness ML or blockchain. 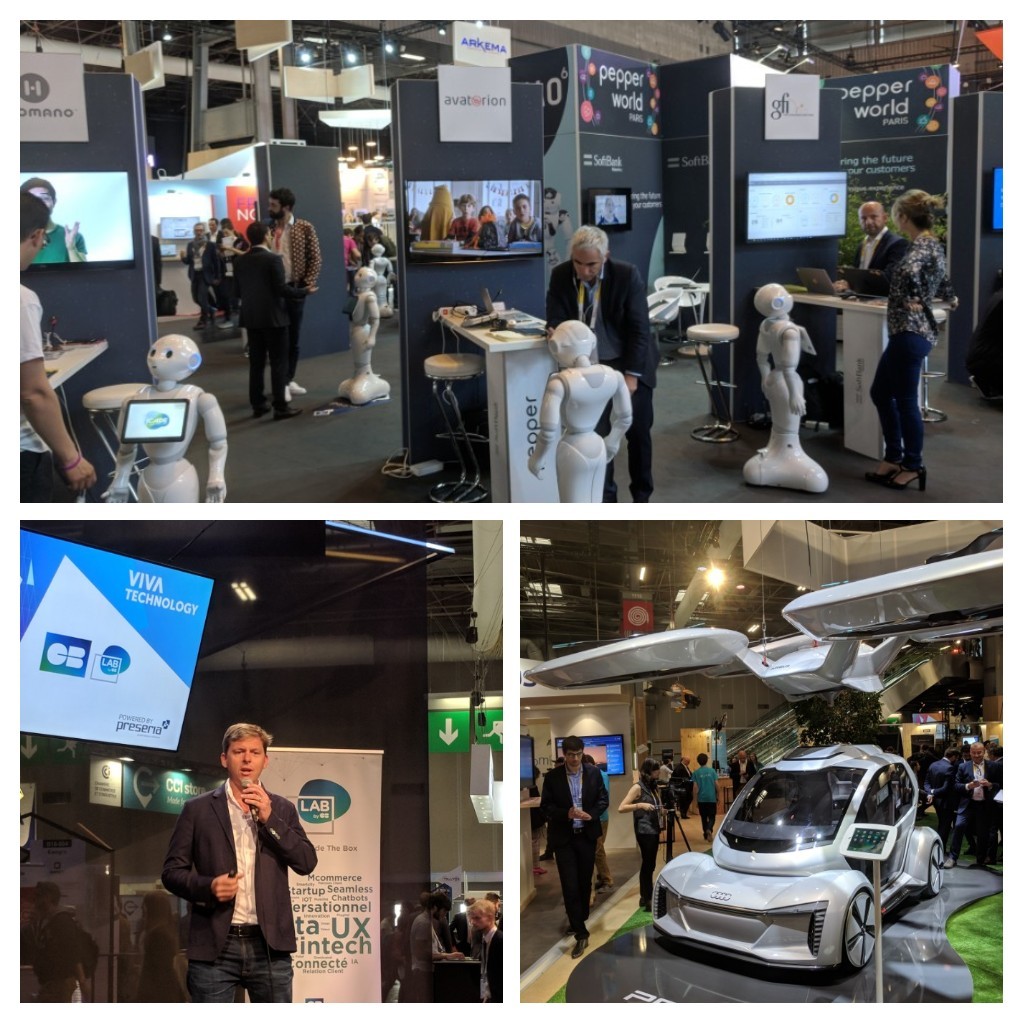 I made a few new hero’s like Bruno Maisonnier, integral to the creation of the ‘Pepper’ robot. He was being interviewed by Natasha Lomas from Techcrunch and was clear that he believed now was the time for “start-ups to beat giants”. His new business ‘Another Brain’ is designing a new type of processing chip that takes inspiration from the way the human brain works, a process he calls “bio inspiration”. He doesn’t believe that there is any Intelligence in the term ‘AI’, the real tech coming to the fore now is Machine Learning (ML) and if you don’t use ML in your business it will die.

Talking on the threat of AI to the human race Luc Julia, VPO Innovation at Samsung, remarked that the only way the robots will kill us is if we tell them to do so, a sobering thought about robot warfare. However, he was quick to point out that the term AI was coined in 1957 and we have ridden a number of hype cycles, the current cycle is arguably going to lead to a ‘winter of disillusionment’ when the promises fail to deliver over the next decade.

The most pertinent question from the audience was on whether AI will lead to less intelligent humans. The pragmatic response was not on the lack of challenge for the human mind but what we may decide to do with our free time. If we, as a species, decide to use leisure hours watching box sets our brains will surely degrade and our cumulative intelligence will diminish. I concluded that the key to anything, including intelligence or cognitive ability is practice, human or AI.

Charles Cadbury is founder of Champers Advisory, a group of expert practitioners in NLP, AI, ML and blockchain who all have practical experience of “shipping” products using this technology stack. If you have not brought anything to market using these disruptive technologies yet, or would just like to learn more from those who have, we can help you. https://champersadvisory.com